Welcome to the trad 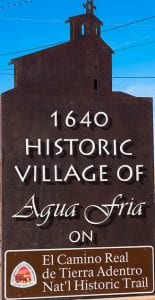 itional village of Agua Fria, a community rooted, by history and values, to the resource –“Cool Water”– from which it takes its name. Archaeological digs show that this land was inhabited as far back as 3,000 B.C. The village itself considers its founding date to be 1640, the date of the first recorded settlement by the grandparents of Major Roque Madrid who received a land grant in 1693 from General Don Diego de Vargas in reward for his military service.

The village sits on an alluvial plain: a flat stretch of land with rich topsoil deposited over time by the Santa Fe River. Water, fertile soil and a slightly longer growing season made the spot attractive for farming.  As more land was granted and more ditches connected from the Rive 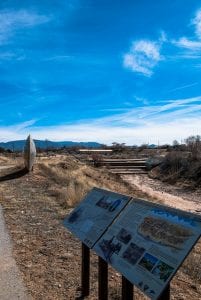 r to the villager’s plots, Agua Fria became the bread basket for nearby Santa Fe, providing food and firewood to its bustling neighbor five miles away.

The two communities were connected by El Camino Real, now called Agua Fria Street. The waters of the Acequia de la Agua Fría ran along both sides of El Camino Real. You can still see a section of the old drainage channel around the State Supreme Courthouse.

Five miles was a long trip by wagon, so the village residents petitioned to have their own place of worship. A local donated the land, and in 1835, San Isidro, the beautiful church named for the patron saint of farmers, was built. 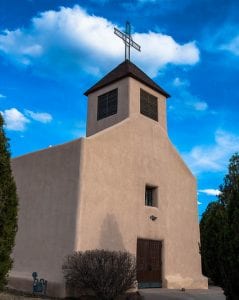 Just two miles square, the community, bounded on the east by Siler Road (or Maez Road, according to Neighborhood Scout); by Lopez lane on the West; by Rufina on the south; and by State Road 599 on the north, has fewer than 3,000 inhabitants, according to the 2010 census. But by dint of history, character and resources, the little village has had an outsized impact on greater Santa Fe.

Writing in the Green Fire Times, local resident William Henry Mee, said, “…without this tiny community, Santa Fe may not have prospered to the extent it has. …The land for the three major electric lines and the gas line entering Santa Fe, the major roads of Rodeo, Cerrillos, Rufina, Agua Fria, West Alameda, Zafarano and SR 599, as well as the sewer lines along Cerrillos Road, Rufina Street Agua Fria Road and Santa Fe River north, were “donated” by the people of Agua Fria.” 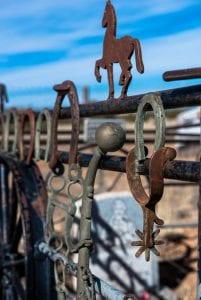 To preserve and honor the community’s heritage and character, local residents organized and, in 1995, succeeded in getting their community designated a “Traditional Historic Community.” To this day, villagers gather every May 15th for a feast day honoring the saint. The ceremony includes a traditional Blessing of the River.

This post would not have been possible without the curiosity and photographic skills of Cliff Boltz, who agreed to visit the village with his camera and harvest its charms.