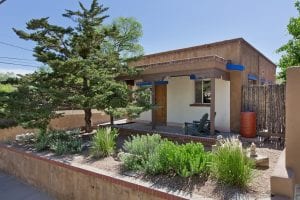 How do you spell South Capitol? Or is it South Capital? South Cap is one of Santa Fe’s most beloved downtown neighborhoods. Look on the web and you’ll find the name spelled both ways. So which is it: capitAl or capitOl?

Although their spellings are almost the same, the two words refer to two different things: one, a city; the other, a building. A capital with an “a” is the seat of government for the state. Santa Fe is the capital of the state of New Mexico. The building where a state’s legislative body meets is known as “the capitol” with an “o.”

You know this. We learned about capitals and capitols in elementary school. So, why is everyone so confused?

Because both words refer to a location. The question is, are we describing the neighborhood for its location within the city, or relative to a specific landmark: the capitol?  If we consider this neighborhood a place that falls in the southern sector of the capital city, it could be South Capital, with an “a.”  But if the neighborhood is named for its location relative to the state’s capitol building, then it would be South Capitol, with an “o.”

Like many, we think the right answer is South CapitOl. Here’s why:

Although South Cap is one of Santa Fe’s older neighborhoods, and thus could have gotten its moniker back in the day when it was one of the few neighborhoods in the southern part of the capital city, it is just the first of many neighborhoods that are south of The Plaza. Lovato Grant and Sol y Lomas are two others.  South Capitol is, however, the neighborhood most directly south of the capitol.

The official website for the Rail Runner, the commuter rail service that from Santa Fe to Belen, names the station between Alta Vista and Cordova “South Capitol.” That’s one official stance. On the other hand, the Santa Fe Multiple Listing Service spells the neighborhood South Capital?

How do YOU spell South Capitol?